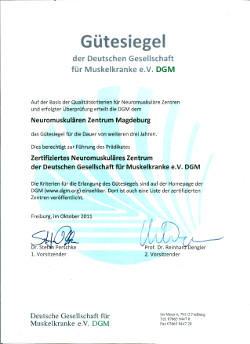 The Muscle Center: An Overview

In the Magdeburg Neuromuscular Center patients with neuromuscular diseases are cared for by an interdisciplinary team of cooperating neurologists, heart and lung specialists, geneticists, orthopedists, rheumatologists, dermatologists, pediatricians and neuro-pediatricians, physiotherapists and social workers. The center is managed by Director Professor Dr. med. Helmut Feistner, Spokesperson Prof. Dr. med. Stefan Vielhaber and Deputy Director Professor Dr. med. Ch. Marwin. In 2008 it became one of first German centers to be certified with a seal of quality by the German Society for Muscular Dystrophy.

The Department of Neurology of the Magdeburg University Hospital treats over 1,000 inpatients and outpatients with neuromuscular diseases annually. The Department has its own metabolic laboratory and imaging center (MRI, sonography). Together with the Institute of Neuropathology (Director: Prof. Dr. Ch. Mawrin) it evaluates more than 100 tissue samples per year (muscle, nerve, skin), as well as several hundred genetic samples analyzed by the Institute of Human Genetics (Prof. Dr. M. Zenker). Research on muscles diseases is conducted at the Magdeburg Muscle Center in the context of a close and long-standing cooperation with other national and international muscle centers. In addition, the Muscle center holds regular case conferences and provides continuing education for doctors and therapists as well as patients and their families.
In 2014 the Magdeburg Muscle Center joined the Central German Competence Network for Rare Diseases (MKSE) at the Magdeburg University Hospital, which is coordinated by Prof. Mohnike of the Children’s Hospital. The objective of the MKSE is the strengthening of interdisciplinary cooperation in the area of rare diseases. It organizes monthly case conferences and allows doctors to forward patient inquiries so that patients with suspected neuromuscular diseases are directed to the outpatient clinic.

Regular case presentation with group discussions of individual medical histories and findings, as well as planning of patient-specific treatments, are conducted with participating specialist hospitals.

The DGM In Saxony-Anhalt runs local support and discussion groups for Muscular Dystrophy patients and their families.
Contact information is available at www.sachsen-anhalt.dgm.org

Main focusses of The Magdeburg Muscle Center are the care for patients with Amyotrophic Lateral Sclerosis (with scientific studies being conducted in conjunction with Prof. Drs. R. Dengler and S. Petri of the Hannover Medical School). Special ambulances for patients with post-polio syndrome patients and patients with inflammatory muscle diseases and peripheral neuro-immunological disorders (e.g., as myasthenia gravis, chronic inflammatory neuropathies) are held. Nevertheless patients with all kinds of neuromuscular diseases are cared for in the centre.

The Christa Lorenz ALS Research Award
The "Christa Lorenz ALS Research Award" is given for outstanding original scientific papers on amyotrophic lateral sclerosis (ALS). The award, which provides an endowment of 15,000 Euros, was presented the first time by the Frankfurt am Main based Foundation for Medical Science on September 5, 2009 at the Magdeburg Faculty of Medicine. The initial recipient was scientist and clinician at the Ludwig Maximilian University in Munich, Dr. med. Stefan Lorenzl. In 2010 the award was given to Prof. Dr. Manuela Claudia Neumann, who works as an Assistant Professor of Experimental Neuropathology and Senior Physician at the Institute of Neuropathology at the University Hospital Zurich. In 2011 Professor Dr. Michael T. Heneka from the University Hospital of Bonn received the award for his outstanding scientific papers on ALS. In 2013 the award went Professor Dr. med. Susanne Petri of the Hannover Medical School (MHH) for her work on the use of stem cells to treat neuromuscular diseases, with ALS serving as a representative case. (more information)

The Frankfurt am Main Foundation for Medical Sciences was founded in 1999 by Christa Lorenz, who was herself afflicted with ALS and ultimately died from it. The Foundation’s purpose is to promote scientific research on this neurodegenerative disorder, which is regarded a model for other age-related neurological illnesses, such as dementia, that involve selective cell death.

Nutritional Counseling
Appointment should be made through the clinic Secretary: Phone: +49(0)391-67-15001